Vade Secure has released a new report detailing the brands most commonly targeted by phishers in North America. The Phishers’ Favorites Top 25 list reveals the most commonly spoofed brands in phishing emails detected in Q3, 2018.

As was the case the previous quarter, Microsoft is the most targeted brand. Phishers are attempting to gain access to Office 365, Azure, and OneDrive credentials. If any of those login credentials can be obtained, the attackers can plunder accounts and steal confidential information, and in the case of Office 365, use the email accounts to conduct further attacks on individuals within the same organization or use contact information for external spear phishing attacks. Vade Secure has recorded a 23.7% rise in Microsoft phishing URLS in Q3.

The extent to which Microsoft is targeted is clearly demonstrated in the graph below: 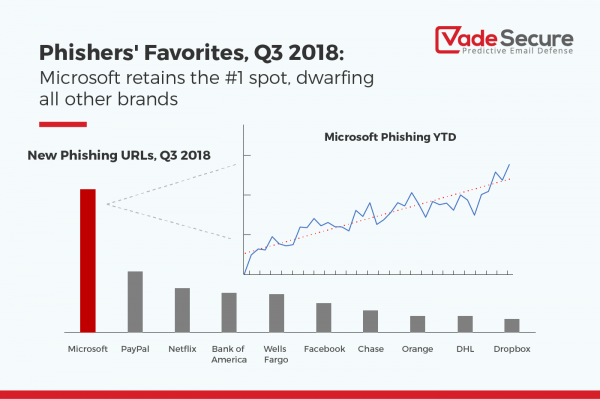 In second place is PayPal, the leading spoofed brand in the financial services. Here the aim is simple. To gain access to PayPal accounts to make transfers to accounts controlled by criminals. There has been 29.9% growth in PayPal phishing URLs in Q3, 2018.

The report also shows that phishers favor Tuesdays and Thursdays for attacks targeting business users, while Netflix phishing scams most commonly take place on a Sunday. Vade Secure’s research also revealed phishers are now using each phishing URL for a shorter period of time to avoid having their emails blocked by email security solutions.

As a result, more emails are delivered to inboxes, highlighting the importance of raising security awareness of the workforce.