Malware targeting cryptocurrency tends to either involve mining cryptocurrency or stealing wallets/hijacking transactions. This malware does all three and also plants a backdoor into victim’s devices, allowing them to be remotely accessed.

According to ESET, which recently published an analysis of the malware, the Tor network is used for communication with its C2 server and the malware is primarily spread via malicious torrents, with the malware hidden in installers for pirated software. The malware infection is usually not detected by users as the installation process runs in the background during the installation of the cracked software.

The cryptowallet stealing function involves monitoring the clipboard for legitimate cryptocurrency wallet addresses. When one is detected, it is replaced with a cryptocurrency wallet address of the malware developers. The malware is also capable of scanning all drives, and searches for data of interest, especially passwords, private keys and information related to banking.

The backdoor installed by the malware gives the attackers remote access to the device, which allows them to install other malicious code. The malware also installs the Transmission BitTorrent client, through which commands are received via the RPC interface on the default port. 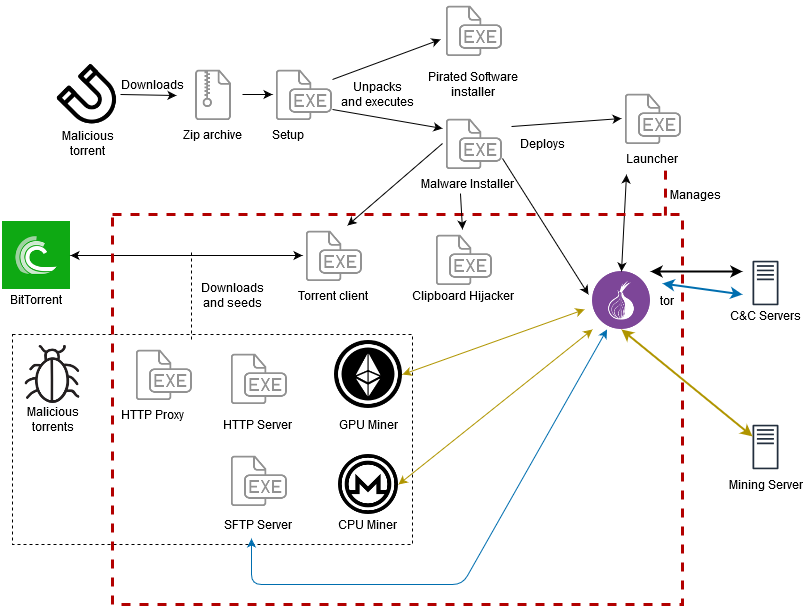 The new malware has been regularly updated over the past two years and has largely managed to stay under the radar. Each update adds new functionality, and the updates are usually performed each month. Version 70 of the malware was released in June 2020.