Two 100,000+ record data breaches were made known to the OCR during April. The largest breach of the month was reported by the business associate Doctors Management Services – a ransomware attack that breached the records of 206,695 patients.

The ransomware was used seven months after the attacker had first obtained access to its systems. The initial access was obtained via Remote Desktop Protocol (RDP) on a workstation.

The second biggest data breach was reported by the healthcare supplier Centrelake Medical Group. The breach lead to the exposure of 197,661 patients’ PHI and was also a ransomware attack that stopped patient information from being viewed. While the delay between access to the servers being obtained and the ransomware being deployed went on for a shorter period of time, it also appeared that the hacker had been exploring the network prior to using the malicious software. Access to the server was obtained 6 weeks prior to the ransomware being used. Ransomware was also utilized in the attack on ActivYouth Orthopaedics.

In May, a Forescout study revealed that the use of vulnerable protocols is typical in the healthcare sector. Risk can be reduced by turning off these protocols, and if RDP must be used, to only use RDP with a VPN.

Phishing attacks also grew massively during April, which highlights just how vulnerable healthcare groups are to this sort of attack. Advanced anti-phishing and anti-spam solutions can lessen the volume of malicious emails that reach inboxes and in tandem with regular security awareness training, risk can be cut.

Deploying multi-factor authentication is also important. In the event of credentials being impacted, MFA will stop those credentials from being used to obtain access to PHI. MFA is not infallible, but it can ensure risk is minimized to a reasonable and acceptable level. According to Verizon, most credential theft attacks would not have lead to in a data breach if MFA been implemented.

Unauthorized access/disclosure incidents lead to the exposure of 264,016 records or 38% of the month’s total figure. While hacking incidents usually lead to more records being compromised, these incidents were more dangerous and had a mean breach size of 18,858 records. The median breach size was 3,193 records. 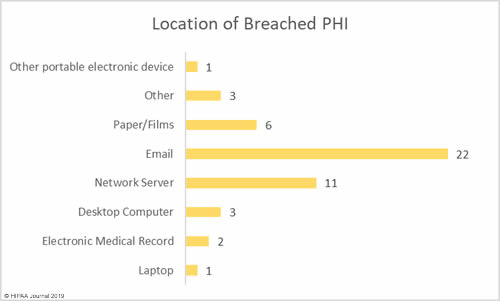 Email was the most common location of violated PHI in April. Email was experienced in 22 data breaches – 47.8% of all breaches in April 2019. While this category incorporates misdirected emails, most email breaches were due to phishing attacks.

Network servers were seen in 11 breaches – 23.9% of the month’s breaches – which include malware and ransomware attacks.

Physical records likes paperwork, charts, and films were involved in 6 breaches – 13% of the month’s overall total. 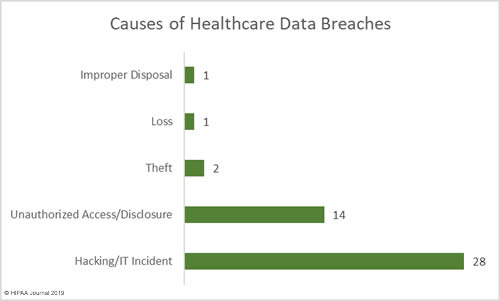 Six health plans reported breaches in April and the other 38 breaches were reported by healthcare suppliers. 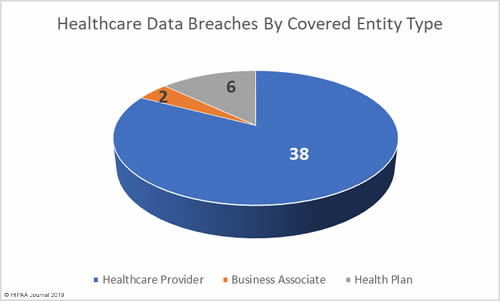 Data breaches were reported by groups located in 21 states in April. California and Texas were the worst impacted, with each state having 5 violations. Florida, Minnesota, and Ohio each had four breaches, and there were 3 breaches reported by groups in Illinois.

There were no fines issued by the HHS’ Office for Civil Rights or state Attorneys General during April 2019.